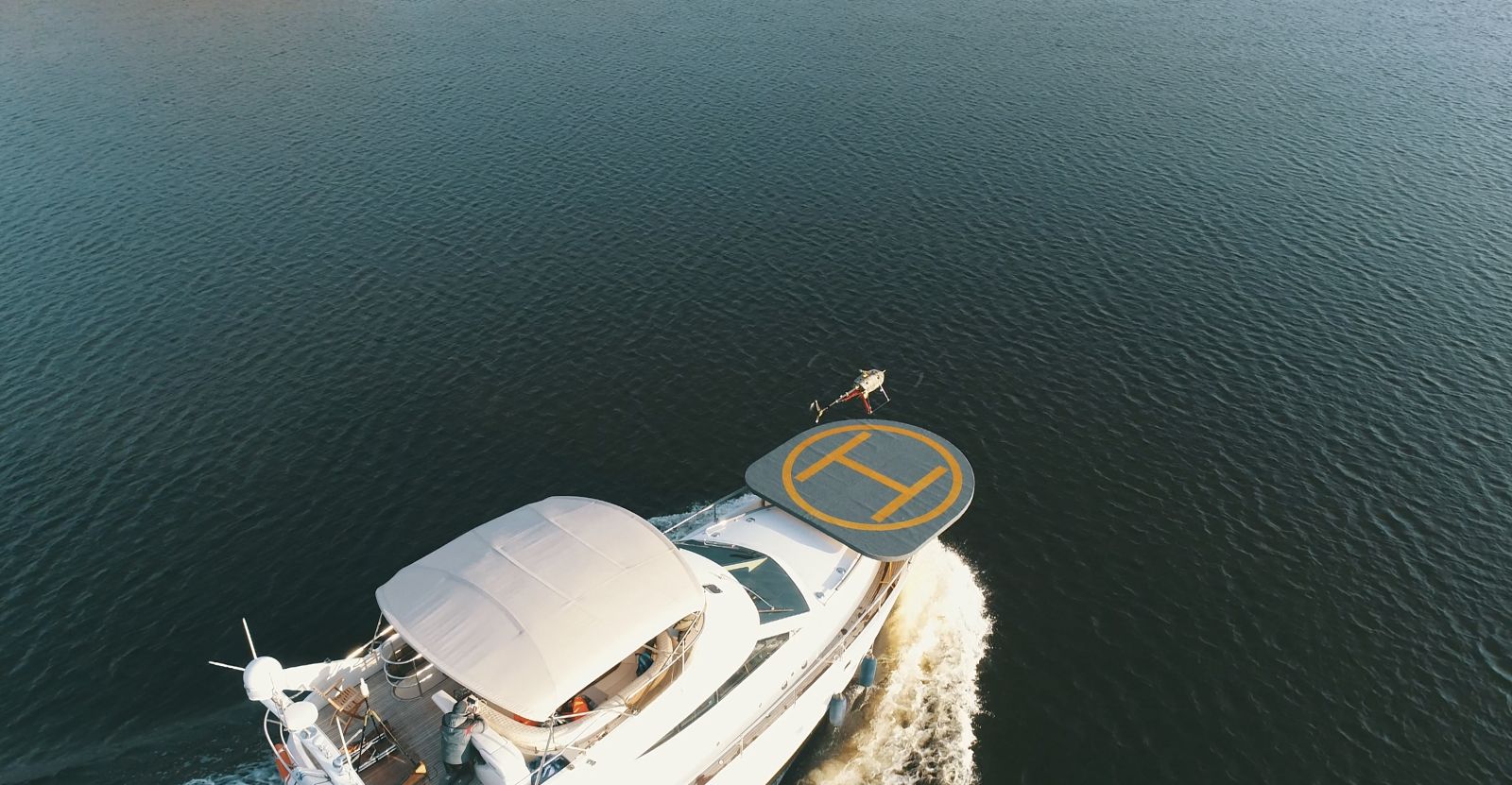 UAVOS Inc. carries out a test program of UVH-170 helicopter to automate the landing on the deck of a ship in motion.

This program is meant to test the system’s ability to perform autonomous takeoff and landings on the deck of a fast moving ship.

Our goal is to provide a stable, automated landing on a moving ship with a landing site of 5x5 meters at a speed of up to 10 knots in a wave of 4-6 points according to Beaufort scale (which means wind speed of up to 14 meters per second).

A large number of customers around the world are interested in the possibility of using unmanned vehicles on ships and in real weather conditions. We made an in-depth analysis of vehicles of various aerodynamic configurations suitable for unmanned missions from the ship and conducted a series of tests.

The tests showed that multi-rotor schemes have a very small reserve of flight time for real missions and a low flight speed, tilt-rotor aircraft can’t cope with turbulence on the deck of a ship and a wind stronger than 8 meters per second due to the large wing surface area, and have low energy efficiency. Airplane-type vehicles require complex landing arrangements.

The ideal aircraft for deck-based aircraft aviation, in our opinion, is a helicopter of a standard aerodynamic design. Conducted flight tests, including landing on a mobile ship, showed that the helicopter has enough maneuverability and energy in the rotor for active maneuvering, and the reaction speed of the helicopter control system allows to compensate ship rocking.

There are some discovered:

One of the problems is the difficulty of using an UAV magnetometer, since the deck of the ship is usually made of steel. To solve this problem, RTK GPS aided magnetometer can be used.

The second problem is the synchronization of the deck and the helicopter to reduce and prevent the occurrence of critical angles of a deck’s plane relative to a plane of helicopter’s rotor, as well as the speed of horizontal offset of the deck relative to the axis of helicopter landing point. We solve this problem by installing a second autopilot in the landing pad and synchronizing it with that installed on board of an UAV.

The third problem is poor optical visibility, splashing water and strong winds make it difficult to use optical landing systems.

It is possible that microwave landing facilities would be ideal for solving the issue of UAV homing to the landing site, but we did not find ready-made solutions in this area. Ultrasonic homing systems also showed unstable performance.

Based on the foregoing, it becomes clear that the automatic landing on the deck of a ship in motion, with waves of 4-6 points according to Beaufort scale and a wind over 12 meters per second, is a rather difficult technical task and requires a comprehensive approach.

Currently, as part of testing this technology, we are conducting exercises in real water conditions, mounting the landing pad on a boat of 17 meters long. A series of takeoffs and landings at a boat speed of 8 knots with a crosswind of 6-7 meters per second had been completed. The dimensions of the landing site were 4.8x5 meters. Tests are conducted with a gasoline version of the UVH-170 helicopter with a payload of 5 kg. For emergency recovery, a modified self-inflating life-jacket is used, mounted on the rear landing gear unit.

In addition to security applications, maritime UAV can be used for civilian missions, such as finding refugees lost at sea, inspection of oil rigs and coastal mapping.