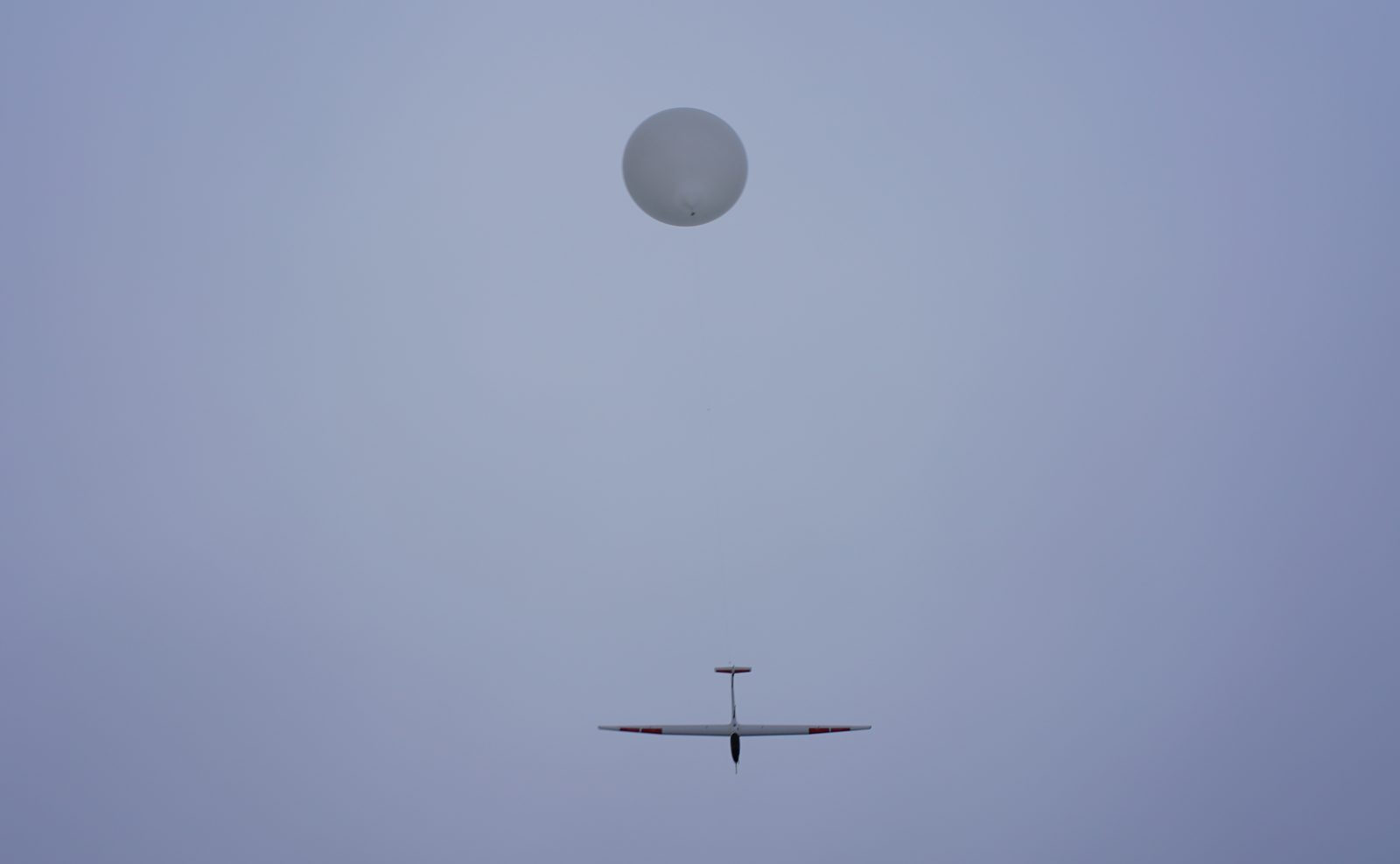 UAVOS and Stratodynamics are excited to announce their pioneering flight of the HiDRON stratospheric glider. The HiDRON successfully reached a new altitude of 30 km (98,450 feet) breaking their previous 25km record. From the start of the HIDRON until its landing in an automatic mode, the flight was conducted in a beyond-visual-line-of-sight (BVLOS) mode.
Watch the HiDRON in action: Video

The night flight was the first of two flights commissioned to test a new mini-EUSO (Extreme Universe Science Observation) AMON Airglow detector from the Slovak Academy of Sciences Institute of Experimental Physics. In addition to the AMON detector, Stratodynamics and UAVOS used the flight opportunity to test and advance aspects of the HiDRON design including stratospheric flight dynamics, data links, and UAVOS’ Autopilot. The HiDRON offered the perfect solution for the campaign as it’s programmable flight path back enabling an unobstructed view upwards from the stratosphere, and returned the valuable instrument to the launch location.

All went according to the plan with the UAVOS ground crew lifted HiDRON by a balloon to the 30km target altitude and released in -60° C (-76° F) stratospheric winds. Despite the harsh environment, the HiDRON performed well with the real time data transmitted to the ground station during a 4 hour controlled descent.

“HiDRON is a real solution to advancing the important research around climate change and other atmospheric chemistry problems,” said UAVOS Board Member and CEO Aliaksei Stratsilatau. “HiDRON provides solutions to tough problems that affect all of humankind, which is why it is such a capable and necessary platform for researchers,” added Aliaksei Stratsilatau.

A second AMON Airglow flight is tentatively scheduled for the end of August from the Canadian Space Agency’s STRATOS Balloon Launch facility in Timmins, Ontario. This time the glider will be released from the Canadian Space Agency (CSA) scientific gondola at an altitude of 35 km, a new milestone for the HiDRON. This campaign represents the first attempt in North America for a stratospheric glider is to be released from a scientific gondola. The data collected during Timmins flight in 2019 will be used for comparison with the results from EUSO-Balloon mission that operated in the same region in 2014.

The HiDRON is a unique balloon-launched unmanned glider capable of a high-altitude flight and autonomous and soaring flight modes. Moreover, it operates well in the cold stratospheric environment (-60° C).
Once the balloon reaches the target altitude, the HiDRON is released and glides in a controlled descent. The return flight back home can be altered in real-time by the operator at the ground station and landing is automatic.